LANSING, Mich.. – Today, Governor Gretchen Whitmer announced a $1.2 million investment in suicide prevention programs for veterans, improving the health and well-being of more than 550,000 Michigan veterans and their families. This represents the largest investment in veteran suicide prevention awareness since at least the year 2000 and likely the largest in Michigan’s history based on available data. The investment was announced today following a roundtable with veterans and veteran advocates that included Lt. Gov. Garlin Gilchrist II and the director of the Michigan Veterans Agency. (MVAA), Zaneta Adams.

“Veteran suicide remains a persistent problem in Michigan and across the country, and we must use every resource and tool at our disposal to protect the lives of our former service members,” said Governor Whitmer. “Today’s investment will increase funding for suicide prevention efforts in Michigan and build on the Michigan Veterans Agency’s continued efforts to ensure the safety and health of veterans and their families. In the last bipartisan budget I signed, we made the biggest investment in veteran suicide prevention in over 20 years because the brave men and women who fought for our country deserve our firm support, both in our words and in our actions. I will work with anyone to ensure they receive high quality mental and physical health care and economic and educational opportunities. Let’s keep delivering for our veterans and their families.

“Michigan veterans are the best of us, and we owe our best efforts and investments to support them and their families,” said Lieutenant Governor Garlin Gilchrist II. “This funding is a step forward in our efforts to end tragic suicides among Michigan veterans and build a Michigan where every veteran and their families can find opportunity, access health care, and thrive. Governor Whitmer and I are grateful for the MVAA’s partnership in funding this holistic approach to connecting veterans to resources and pledge to continue standing up for Michigan veterans.

“The funding will support the Governor’s Challenge’s ongoing efforts to prevent suicide among military members, veterans, and their families,” said Zaneta Adams, MVAA Director. “An effective veteran suicide prevention strategy involves a holistic approach. We know that the connection to health care and other resources reduces the number of suicides among veterans. So when we help a veteran with housing needs or an emergency grant, we are part of the prevention. But we need everyone’s help. From barbershops and banks to schools, hospitals and churches, we should all be involved in preventing suicides among veterans and their families through the Michigan Veteran Connector initiative.

According to the latest available data from the US Department of Veterans Affairs (VA), 704 Michigan veterans died by suicide between 2016 and 2019, an average of 176 suicides per year over four years.

Issues that can lead a veteran into crisis include housing and employment issues, substance abuse, and lack of mental health supports to combat PTSD. A critical first step is to get our military veterans to identify themselves as veterans and understand the benefits and resources that are available to them. The MVAA, through its new Michigan Veteran Connector initiative, will connect with organizations and businesses across the state in hopes of enlisting their help in reaching veterans. By simply asking customers if they have served in the military and, if so, referring them to the MVAA’s 1-800-MICH-VET hotline, these veteran connectors can ultimately help. veterans to connect to the resources they need to thrive.

Another way the MVAA and the Governor’s Challenge are addressing veteran suicide is by emphasizing safe gun storage and free gun locks through the VA. Nearly 70% of veteran suicides are the result of gunshot wounds. Additionally, the Suicide Prevention Team promotes the AV’s new easy-to-remember Crisis Line number; veterans can now simply dial 988 and press 1 to be connected with a crisis counsellor.

The story of Michael Torrez

Fight veteran Michael Torrez, 42, of the West Branch, has called the Crisis Line multiple times to help fight buddies and for his own suicidal thoughts. Torrez, a former tank crewman who served two tours in Iraq, lost five friends in combat and three more to suicide after returning home. At some point after his release in 2012, Torrez was homeless and using alcohol to cope.

But Torrez would find hope through VA housing and work therapy programs and by meeting his wife, fellow Army veteran Angela Torrez. Now the couple are giving back to their fellow veterans. Angela is completing a master’s degree in social work specializing in suicide prevention, and the couple also serve as mentors for other veteran couples.

“Many veterans of the Operation Iraqi Freedom era have a bad taste in their mouths about the agencies and programs that are supposed to help them,” Angela Torrez said. “I’m trying to defend – yes, things have gone wrong in the past, but they’re getting better, and here’s how to get help. It seems like a constant battle for veterans, and they may feel like they don’t have the energy to get through it all. But if they have that support system by their side, they can find hope, just like Michael did.

If you are a veteran in crisis or concerned about a crisis, call the Veterans Crisis Line at 988 and press 1; text 838255; or chat privately online at www.veteranscrisisline.net. 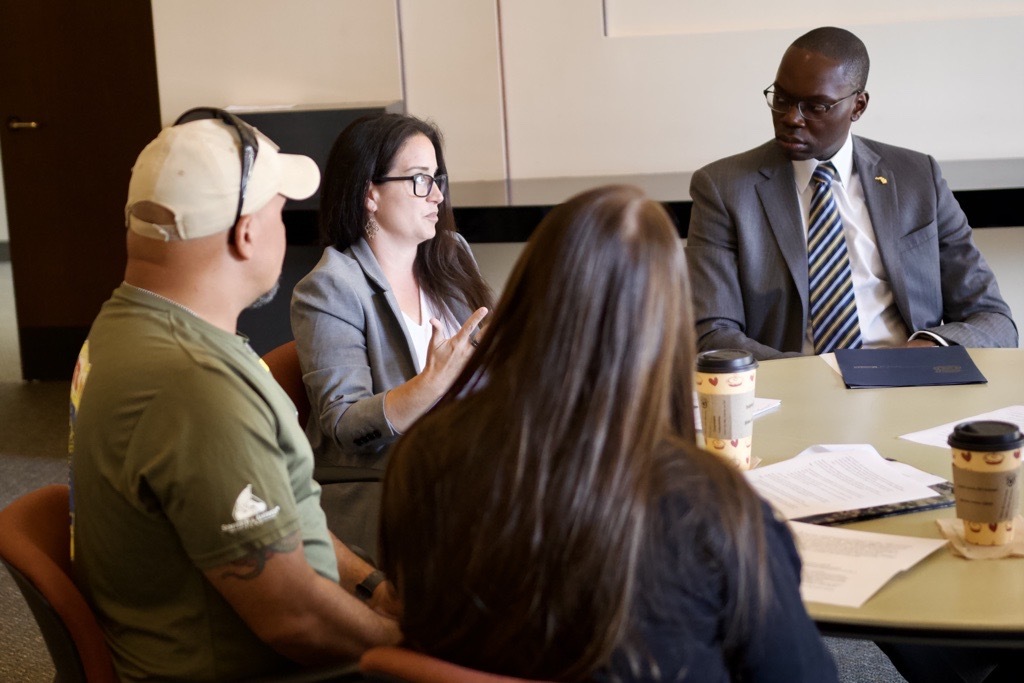