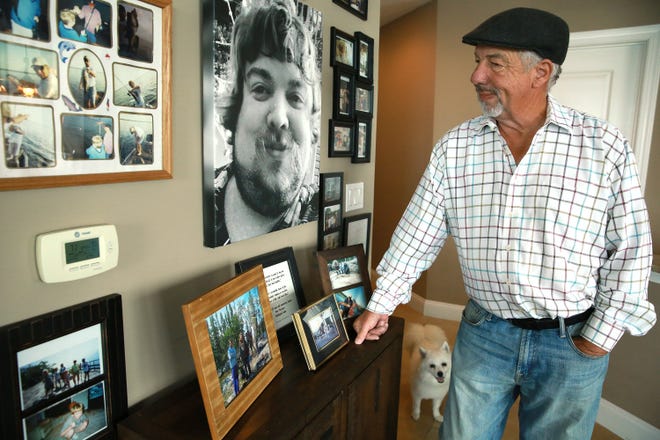 After his son took his own life in 2019, Joe Kenney promised at his funeral that he would do everything he could to prevent others from taking the same fateful step.

“We’ve had so many testimonies from people saying the only reason I’m alive is because of Here Tomorrow. When you hear that, it tears you apart,” he said.

Here Tomorrow, based in Neptune Beach, is a non-profit organization he helped found in January 2021. Its goal is to provide quick – and easy – access to conversations about mental health, including suicide, to those who need it and then guide them to longer-term support.

Its services are free.

In a Times-Union article a year ago, Kenney, an entrepreneur, said he had vowed to spend his retirement and his own money helping others after Gary died.

“I wasn’t there to save his life. My goal now is to save someone else’s life,” he said in that post.

Just over a year later, Here Tomorrow is thriving, receiving philanthropic grants, helping hundreds of people, and hiring more counselors to work with those who reach out. He receives inquiries about starting similar operations across Florida and out of state.

“Itis extremely exciting and shocking at the same time,” Kenney said. “We work with about 550 friends now, in a year; we call our customers, our clients, our friends. I thought if we got to 30 I would be happy.

Here Tomorrow now has 155 people in therapy at no cost to them. He also hosts group sessions twice a week for 15 or more people, which will soon increase to three times a week.

“I think that’s just the tip of the iceberg,” Kenney said. “I really believe that once the word keeps getting out, those numbers are going to quadruple.”

The Delores Barr Weaver Legacy Fund and the J. Wayne Weaver Fund recently pledged to match contributions up to $500,000 for a total of $1 million through the end of 2024. And Kenney said he would also match donations up to $1 million.

“Wayne and I are proud to support this grassroots new effort…” Delores Barr Weaver said. “Clearly the needs of the community are great and we hope many people will join us in making the campaign a success.”

Many other groups and foundations have also pledged support, totaling around $2 million in pledges over the past year.

“My knees were hurting from getting down on my knees begging,” Kenney joked.

Kenney also traveled to Tallahassee to speak to the state Legislature, which he said has committed $500,000 to the group, subject to Governor Ron DeSantis’ signature.

Kenney said his goal from the start was to expand Here Tomorrow to all of Florida. It could be bigger than that though.

“I think it will go nationally. I really do,” he said. “I’ve been asked to be in Chicago, New York and Los Angeles. The more we do it, the more we realize there’s nothing else like it.”

It pays tribute to Hannah Hackworth, Executive Director of Here Tomorrow, her staff and the growing number of so-called peer recovery specialists. State-approved specialists have had their own experience of suicidal thoughts.

Their goal is to talk to people in need and ensure they see a therapist quickly, virtually or in person.

Kenney calls it “peer power.” There are now eight in the group, with plans to expand to 15 by September.

“They’ve been there and they want to give back,” he said.

Kenney worked in the fire safety field with major corporate clients across North America until he sold his business. He said his money and his connections meant little, as he tried to get help from his son, not knowing where to turn or what to do.

“If that [Here Tomorrow] had been here, my son would still be here, I truly believe. He would be one of our peers,” he said.

April is a difficult month for him. It’s the month Gary committed suicide, and it’s his birthday month. He would be 33 now.

After the army:Jacksonville-based Wounded Warrior Project finds high rates of suicidal thoughts and pain among veterans

“It’s hard for me to want to admit that I found meaning in my son’s death,” Kenney said. “So I agree, and I don’t know if I want to do this.”

But it’s clear to him that Here Tomorrow has made a difference, and he’s grateful for that.

“I feel at least together that him and I have helped a lot of people,” Kenney said. “He would have liked that.”

For more information, visit heretomorrow.org. If you or someone you know has depression and is looking for help, contact Here Tomorrow at (904) 372-9087 or hello@heretomorrow.org. The National Suicide Prevention Lifeline is also available 24 hours a day at (800) 273-8255.