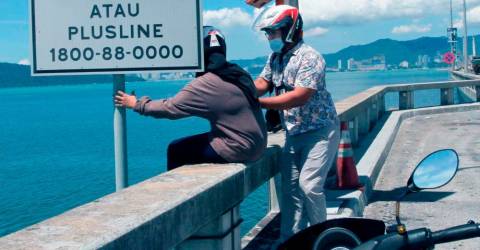 PETALING JAYA: Safety nets, sensors, and suicide avoidance devices can delay a suicide attempt, but the only preventative measure for such incidents is human contact.

Director of Communications Engineering Department at Mara University of Technology, Dr Mohamad Fahmi Hussin, said engineers could come up with the latest gadgets and technologies, but they would not be able to prevent the suicidal thoughts.

“From a technological point of view, suicide prevention mechanisms are limited. On the contrary, programs based on human interaction might be more effective,” he said commenting on the wave of suicide attempts over the past month which has made the Penang Bridge a hotspot for crime. .

Mohamad Fahmi said that if anyone decided to commit suicide at some point, they would most likely succeed.

“The idea is to help them change their minds before committing the act.”

Penang Environment, Welfare and Caring Society Executive Advisor Phee Boon Poh said the state has many active suicide prevention programs, for example the Penang Suicide Prevention Committee (PSPC), which consists of of psychologists and mental health practitioners in the state.

“They meet fortnightly to discuss causes, preventative measures and corrective actions for issues such as stress, depression and general mental health.”

“We work very closely with Befrienders, they have an office here and a 24 hour hotline for anyone who wants to talk about their issues.”

“The PSPC has held several workshops with media professionals, healthcare workers and the public on mental health.

Phee said Penang Chief Minister Chow Kon Yeow had ordered a review of all programs on mental health, suicide prevention and other related issues in the state.

“We have contacted Lebuhraya Utara Selatan Project, Penang Bridge Operator, Fire and Rescue Service and other relevant agencies to discuss a plan of action,” he said, adding that the state has listed three phases of suicide prevention measures specifically for the Penang Bridge.

“In the short term, closed-circuit television (CCTV) cameras with an audio system and a safety net will be installed along the bridge. The proposal is pending approval from PLUS.

Phee said PSPC is willing to train operators on what to look out for when monitoring CCTV.

“We will create an emergency response team to deal with attempted suicides. The team will use motorcycles for rapid interventions.

“In the medium term, artificial intelligence (AI) in the form of sensors capable of alerting staff to unusual movements when monitoring the bridge from the office will be installed.

“The fire and rescue service will also have two bases on the island and on the mainland closer to the bridge. They will include volunteer firefighters to improve response times. We will place posters with information on hotline numbers to call at strategic locations along the bridge,” he said.

Phee said they were also discussing long-term solutions using AI, but that will be revealed later.