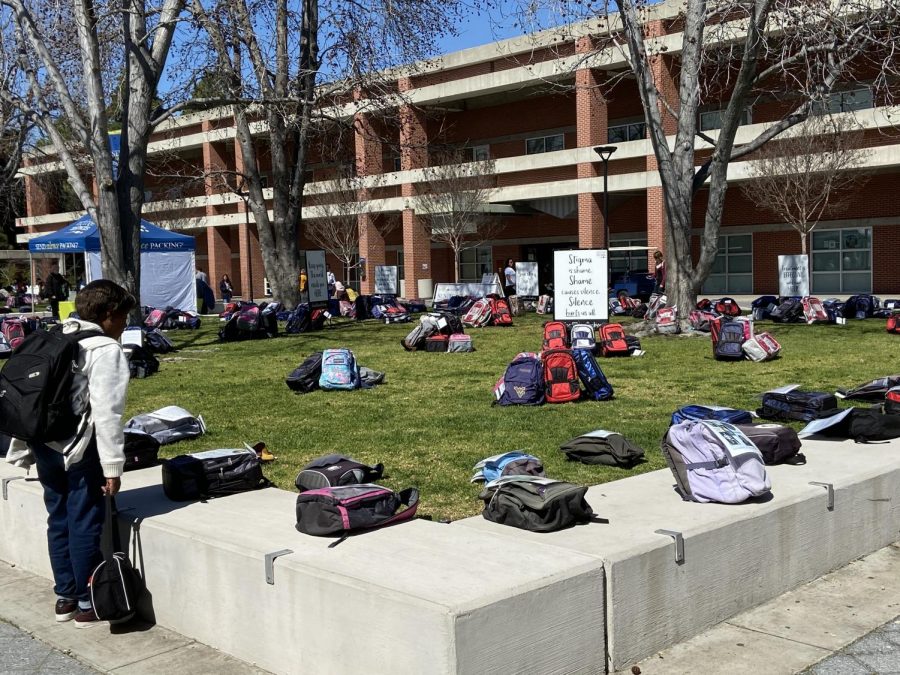 Dozens of backpacks, personal stories to share at Curran Plaza

The Send Silence Packing exhibit, seen here from 2020, featured backpacks donated from college students who died by suicide in an effort to encourage hope and resource awareness. Photo by Uyen Pham/City Times

The 9 a.m. to 3 p.m. event will include a display of dozens of backpacks at Curran Plaza in remembrance of students who have died by suicide.

The personal stories of those who lost loved ones are also included.

The story was featured on this week’s edition of Newscene, the award-winning student-produced television current affairs show. Newscene airs on ITV Channel 16 on Wednesdays at 5.30pm

The event is put on by the City College chapter of Active Minds, a national organization dedicated to raising awareness and helping mental health.

According to Active Minds, up to 1 in 5 adults have a diagnosed mental illness.

Suicidal Lifeline: If you or someone you know is struggling with suicidal thoughts, you can call the US National Suicide Prevention Lifeline at 800-273-TALK (8255) any time of the day or night, text COURAGE to the Crisis Text Line at 741-741 or chat online.

In the fall, Active Minds volunteers Yello Goller and Karolina Guerra Tena spoke about the student club’s efforts to help students return to campus after it was closed for nearly two years due to the pandemic.

• Ukrainian President Volodymyr Zelenskyy received a standing ovation from members of the US Congress after a virtual speech earlier today. Zelenskyy called for more military aid and hinted at non-NATO membership.

• China is currently experiencing its biggest outbreak of COVID-19 since 2020. Tens of millions of people are being sent back into another lockdown because of the “stealth omicron” variant.

• The average cost of gas in San Diego is close to six dollars per gallon. In recent weeks, a 35% increase in footfall for e-scooter companies, such as Bird and Lime, has been reported. A local non-profit organization also lends e-bikes to residents in financial difficulty.

• This weekend, the curtains close on the annual San Diego Latin Film Festival at AMC Mission Valley. The power of experiences shared through storytelling in the form of live music, entertainment, and art honors the contributions of the Latinx community.

2022-03-16
Previous Post: 988: A new number for National Suicide Prevention Lifeline, but funding in question
Next Post: Praise for suicide prevention program – despite rising suicides in Hampshire