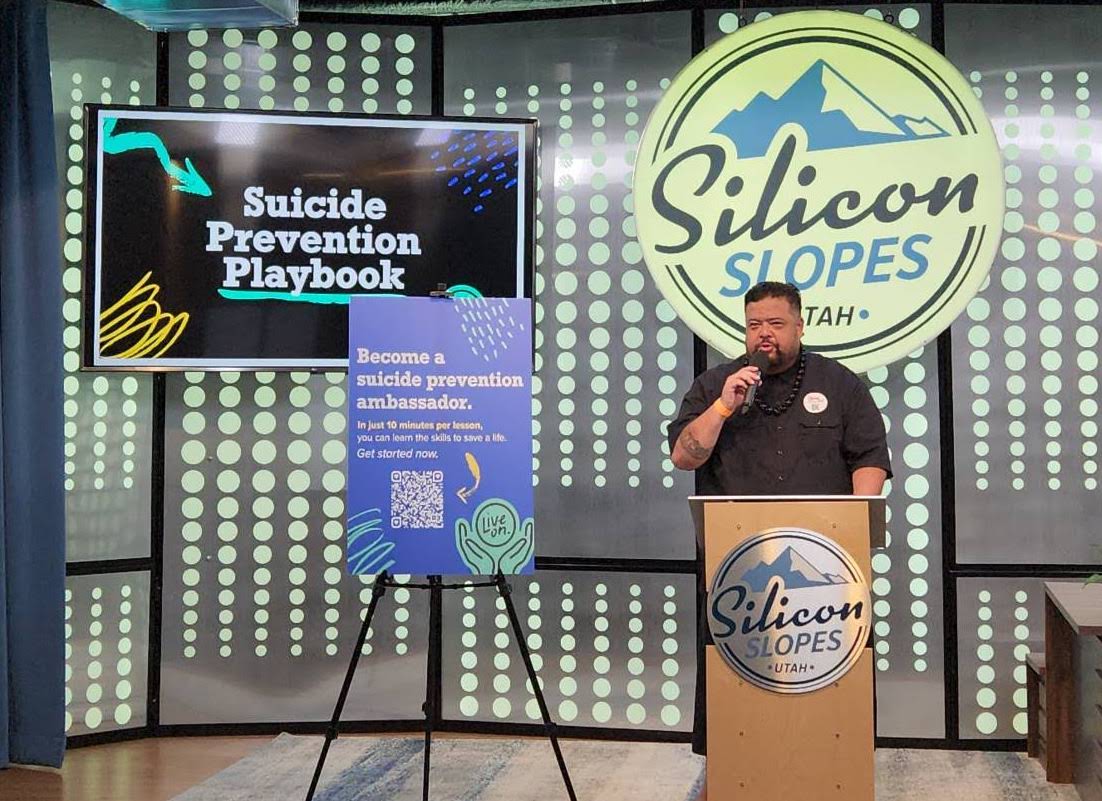 The free playbook will include 10 lessons or Instagram posts on how to prevent suicide, how to talk about mental health, how to create a safety plan for those with suicidal thoughts.

LiveOn, a public-private mental health and suicide prevention campaign in Utah, began planning a new social media campaign to educate about suicide in October. However, it wasn’t until Joe Tuia’ana’s story was covered by multiple news outlets that LiveOn came up with the concept of creating a “playbook”.

Tuia’ana, a single father of three daughters, was driving his children to a high school basketball game when he noticed a man at the I-15 Lehi overpass. According to Tuia’ana, the young man looked peculiar, as if planning to jump.

Tuia’ana then called the police and approached the man, holding his arms outstretched as if to hug him.

“I kept telling him, ‘I love you, brother, I love you, brother,’ over and over again, and I vividly remember his big crocodile tears running down his face,” said Tuia’ana. “He was looking frantically between jumping and looking at me, and after a little while he started looking at me more than the freeway, which is when I jumped up and pulled him over the fence.”

Tuia’ana said he and the young man keep in touch and that he has invited him to his house a few times.

Nearly six months after the incident, Tuia’ana explained that people working on the LiveOn project contacted him to become the face of the social media playbook campaign and make it happen. the promotion.

People at Boncom working on the LiveOn project came up with an approach to educate people about suicide prevention after Tuia’ana’s story appeared in the news.

“It was in early January of this year that Joe Tuia’ana’s story aired on national television and one of the reporters writing his story said something about him not there was no playbook for people on how to stop someone from taking their life,” Durfee said.

Allison Foust, administrator of LiveOn’s suicide prevention program, agreed that they hadn’t thought about the need for a manual on this topic before.

“We brought together a group of different experts in the state and asked ourselves what each individual needs to know about mental health and suicide, and how people can learn about it in a way that will empower them. to talk to their friends. and family members,” Foust said. “So we started with a 60-page Word document containing everything we wanted everyone to know.”

Foust said his team’s goal was to make the document digestible and relatable and they ultimately broke it down into 10 Instagram lessons.

“Our hope is to eventually be able to speak to a younger demographic on TikTok and then the business community on LinkedIn,” Foust said. “There have been a lot of comments and engagements so far.”

Boncom Brand Manager Heidi Ertel also spoke about LiveOn’s expansion plans and mentioned that they would like to make playbook content available in Spanish.

Tuia’ana said he is currently developing a non-profit organization called “I love you brother” to create affordable and access to mental health for men and father in particular.

“Suicide is preventable and we all have a role to play in suicide prevention,” Foust said. “This playbook will help you understand what that role is and it will help you recognize the warning signs, how to have difficult conversations, get people the help they need…”

When asked why this suicide prevention manual is important to the Utah community, and in particular to BYU students, Boncom Vice President of Customer Services Steve Wright said the need to start important conversations and share the message.

“The LiveOn Suicide Prevention Handbook is a fantastic resource that has been put together by local and national experts, but if people aren’t using it and sharing it, then what’s the point?” Wright said. . “We really want to encourage audiences like BYU to use it because information like this needs to get out there.”

Wright also referenced BYU President Kevin J Worthen and his participation in a video in which he made a suicide prevention public service announcement.

“It’s a really, really hard conversation to have, so one of our main goals with this project is to normalize the conversation about suicide prevention and let people know it’s okay to talk about mental health.” , Wright said. “The playbook kinda takes that social pressure and stigma out of the discussion, because it informs people on their social networks, in such a natural form.”