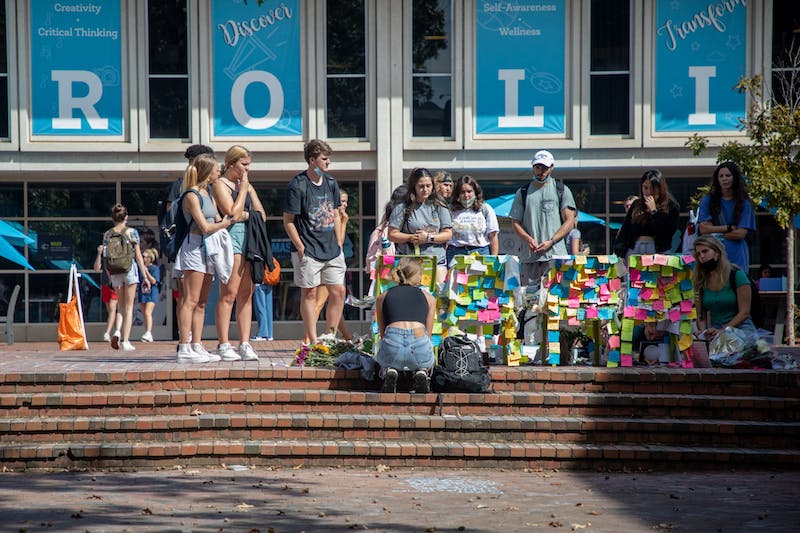 Content Disclaimer: This article contains mentions of suicide and self-harm.

In 2020, there were 1,436 suicide deaths among North Carolina residents. In Durham and Orange counties, 206 community members lost their lives to suicide between 2016 and 2020.

The Orange County Health Department held a mental health first aid training for adults on September 16 and will be holding another on September 23 from 9 a.m. to 5 p.m.

This week’s event, a ‘Professional Partners’ training, is designed for employers, police, hospital staff and first responders and will take place at the Whitted Human Services Center in Hillsborough.

Barb Maier, the immediate past chair of the National Alliance on Mental Illness of Orange County, said mental health first aid trainings are crucial because mental illness is prevalent throughout the county.

“If you don’t understand how to interact with someone who’s in the middle of an episode, you’re going to do all the wrong things to make the disease worse,” she said.

The County Durham Public Health Department and Orange County Health Department will also be hosting a Suicide Prevention and Awareness Walk with other community groups on Thursday, September 29 from 6:30-8 p.m. Leigh Farm park in Durham.

Thava Mahadevan, director of operations for UNC’s Community Mental Health Center of Excellence, said the community is seeing large numbers of people with anxiety and depression, from elementary-age children to college students.

To provide youth suicide prevention training and education, the NCSCHS report suggests providing school resources that include the needs of students of color and those who identify as LGBTQIA+.

According to a 2020 study, 82% of transgender people have considered suicide and 40% have attempted suicide, with an increased number among younger people.

“For me too, being a black person, a lot of the racial divide in the country can be stressful at times,” she said.

Mahadevan said social media has a particularly strong effect on young people. He said that after people use social media for a while, they start to feel worse.

He added that network television and 24/7 news feeds tend to sensationalise events and give people the impression that the whole world is in chaos, which aggravates their mental health.

John Gilmore, director of UNC’s Community Mental Health Center of Excellence, said the loss of a sense of community and social connections has worsened mental health both in Chapel Hill and across the country. The COVID-19 pandemic and increased social media presence have contributed to this loss of social interaction, he said.

“I think there are a lot of forces that make it a really big deal, because we need social interactions,” Gilmore said. “We have to know our place in the community, in the world, and that’s much more difficult for everyone, and especially for teenagers who are in the process of learning how to do that.”

Mahadevan said there are a variety of simple things people can do to protect their mental health and prevent problems before they become more serious. He stressed the importance of healthy eating, sleeping and exercise habits, as well as the importance of having a daily routine.

“Another element is the sense of community, whether it’s joining a civic group, joining a church, whatever works,” he said. “Being around people is incredibly helpful because loneliness is a huge factor and really a risk factor for those who are already susceptible to depression, anxiety and other conditions.”

Gilmore said that while Chapel Hill likely has more places to engage in mental health treatment than other places in the state, it can still be difficult for people to find appointments in timely with therapists in the community.

Mahadevan said the COVID-19 pandemic has taken a toll on clinicians. He added that many organizations struggle to hire clinical social workers and psychologists.

“If people don’t get care when they need it, unfortunately they end up at higher levels of care like the emergency room, or it turns into a crisis,” he said.

Gilmore said there was a stigma around admitting a mental health issue.

Maier said a good way to support a loved one struggling with their mental health is to make yourself available to that person in a nonjudgmental and supportive way. His advice is that even though it’s hard and scary to do, it’s important to ask someone directly if they feel like hurting themselves or someone else if they shows signs of self-harm.

Igollo-Ogele said there is often a negative portrayal of suicidal people. She said people often see those with suicidal thoughts be “attention seeking”.

“There’s not really a place for people who may be suicidal and don’t really want to go all the way, to get the help they need because there’s so much shame and of condemnation that surround him,” she said.

Igollo-Ogele added that people don’t necessarily need to make extravagant gestures to support loved ones struggling with mental health issues. She said even eating a meal with a friend can be helpful.

She said that while “just doing what makes you happy” is a cliché, people don’t really give themselves enough time to do what they love.

If you or someone you know is having a mental health crisis, call the national helpline on 988. The line is available 24/7 by phone or text, and is free and confidential .

UNC students who need help during this time can contact Counseling and psychology services Where Student welfare. CAPS can be reached 24/7 by phone at 919-966-3658. University employees can reach the Employee Assistance Program.

University mental health resources can also be found at the Heels Care Network website – including a list of on-campus crisis care and therapy options, care referrals and peer support.

Peer helpers at the student organization Peer2Peer – which provides mental health resources for graduate and undergraduate students – can be contacted via their online form. Students can remain anonymous.

For more information on local and on-campus mental health resources, see a list compiled by the editorial board of the Daily Tar Heel.

To get the day’s news and headlines delivered to your inbox every morning, sign up for our email newsletters.