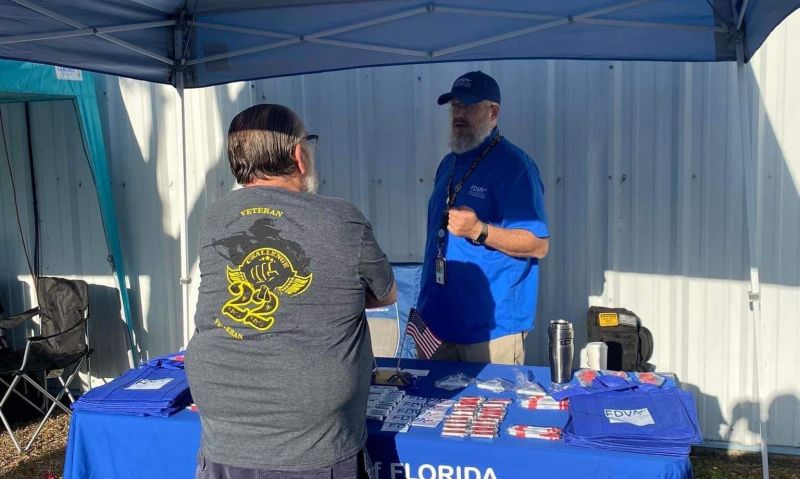 Florida American Legion Department District 13 Commander Bud Boyer said the state was the root of veteran suicides for the past three years. “Here in Florida, you can talk to anybody at a post, and they’ll know somebody who (died by) suicide,” Boyer said. “Those who need help, we have to help them. That’s why it’s important to dedicate our time and money to this cause (veteran suicide prevention awareness)…we care for our brothers and sisters who we trained with, fought with , with whom we returned. We have to take care of each other.”

The American Legion Family of District 13 – Legionnaires, American Legion Sons, Legion Auxiliaries and Cavaliers – supported their mission to care for each other by hosting a Veterans Suicide Awareness Event at the American Legion Post 110 in Port Charlotte, Florida on March 26 from 10 a.m. to 5 p.m. The event was open to veterans, their families and caregivers, and the community, where 25 vendors were on hand to help with mental health, counseling, filing VA claims, and more.

“I think the biggest thing for veterans is that we don’t always know the resources,” said Mike Turner, Post 38 member in Fort Myers and co-chair of the event committee. “We have tried to cover the full range of services for Florida State military, Florida State veterans, family and dependents, and caregivers. We’ve had quite a bit of healing to help heal people or let them know there is a way to heal.

“If we saved one person (Saturday), we did a lot,” Boyer said. “They came, got help with their claims and got to see all these other people who are willing to help. This is for the veterans, this is the most important thing to get these guys and these girls and these girls to stop and say “Hey, I have more to live, I don’t want to do this”. I want to live.'”

Over 300 people attended the Veterans Suicide Awareness event at Post 110. And 12 veterans received a 100% VA disability claim on the spot, with others in the claims process.

“If we can only save one veteran a day, it might end up being two, three, four people a day to the point where that 22 equals 0. We’re all very committed to that,” added Boyer.

Before veterans interacted with vendors, the event began with a memorial walk for veterans who died by suicide. The march was escorted by Port Charlotte Police with the prayer of Florida Department Chaplain Barry Roberts, and two equine horses followed the veterans. “Cars were beeping and waving. It was just amazing,” said Lehigh Acres Ext. 323 member Deanna Hall, who also served as co-chair of the event’s planning committee. “When a veteran commits suicide, it affects the whole community, it affects the family, it affects the person they worked next to (thinking), ‘How could I have done something different?’ It’s a community epidemic. We must do better to help them. We need to realize this. I’m very passionate about (veteran suicide awareness and prevention).

After the march, a presentation of the colors was given by Port Charlotte JROTC and remarks by several members of the American Legion family. Florida Department of Veterans Affairs and Rehabilitation Chairman Alan Cohen challenged everyone to dedicate at least two hours to helping veterans over the next 30 days; and Auxiliary Department of Veterans Affairs and Rehabilitation Chairman Dee Bell reminded everyone to thank their loved one for their military service. At a time when her husband was to be honored for his service, she realized from all the men and women she thanked that she never said “thank you for your service” to her husband. “There wasn’t a dry eye,” Hall said after Cohen and Bee spoke.

More emotions followed when all Vietnam veterans were called to show up to receive a warm welcome and a Vietnam lapel pin. It was a very emotional moment for Hall as she paid tribute to her fellow Legionnaires who are Vietnam veterans and her father who served two tours in Vietnam as a US Marine.

Hall said it was uninterrupted all day as attendees enjoyed talking with vendors, listening to the Blackbird Anthem band and eating from the food provided, and there was face paint and for the kids. “God was with us throughout the event,” she said. “We were so passionate about (veteran suicide awareness). It’s just important that we spread the word. It is necessary to talk about it. »

District 13 held a one-day event, but Boyer added that the Florida department is dedicated year-round to raising awareness about veteran suicide. “We talk about it; we are still working on something that has to do with suicide prevention.

“We feel they are afraid to ask for help. That’s why we organize these events,” Boyer said. “There is nothing to be ashamed of, there is nothing to worry about if you ask for help. With (these events), we hope to show people that there is no reason not to ask for help. In addition, we let people who have never served know that we have served, we have put on the uniform, we have protected you. Come see what’s going on and if you really believe in the military, you believe in the veteran, join us in our cause.