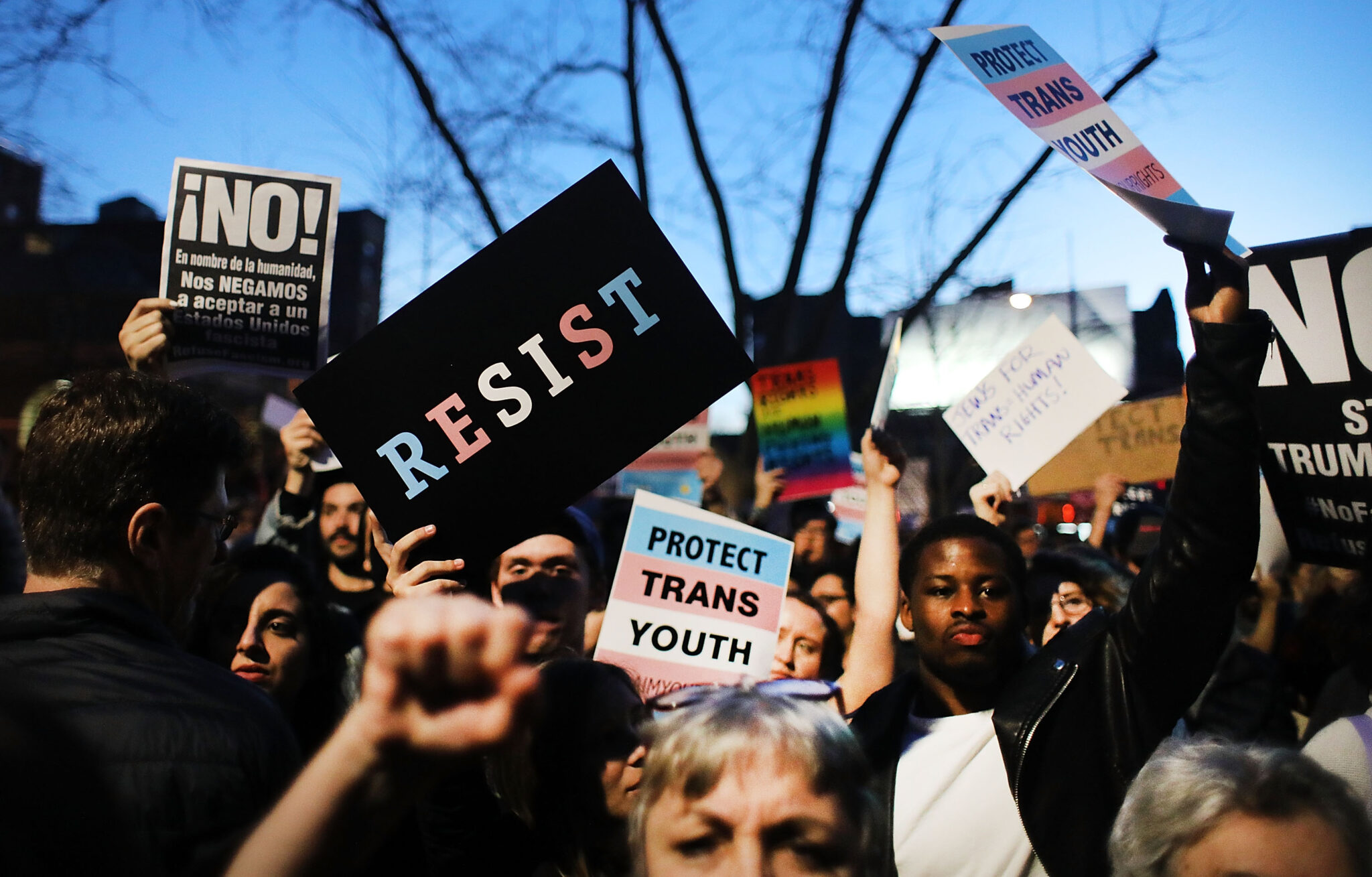 I am trans. This year, I’ll be 30, and my teenage self would be beyond amazed — not just the joys that fill my life, but the fact that I’m alive.

I’m part of the last generation that didn’t quite have the language for the feelings that flooded us when we were kids. I couldn’t understand why I couldn’t take off my shirt while stomping through puddles with my friends, why I never got invited to sleepovers I really wanted to go to, or why I seemed to be the only one power’ I don’t quite envision my future self as a devoted wife and mother.

The church, ridicule from my peers (and their parents), and decades of seeing only heterosexual relationships or heterosexual actors perform caricatures of queer romance in the media didn’t change who I was. My family has always supported me. But at that time, there was so little knowledge and access to care that I badly needed that they couldn’t help me like they would if I were a child today.

When puberty hit at age 11, I fell into a deep depression. I was too young to know the word “suicide” when I decided it was my only option.

Let’s be clear: being transgender and queer didn’t make me suicidal and depressed, it does exist in a transphobic and homophobic world.

Children who deviate from the strict binary of gender and sex have existed around the world for centuries. We weren’t suddenly born out of sea foam after seeing our first trans TV character. We are finally at a point where we have the language for who we are and the ability to create community.

Anti-transgender legislation, requiring the word “gay” not be whispered in classrooms and punishing parents who dare to totally love their children – none of this will change who those children are on the inside. The only thing these sectarian “solutions” do is make more children depressed, tear families apart, and kill children.

It shouldn’t be radical to say I don’t want kids to kill themselves, but apparently that’s where we are.

Young trans people are already suffering without being a right-wing punching bag and boogeyman. 2021 has been the worst year on record for anti-transgender legislation, with many laws targeting our young people.

Families in Texas are making contingency plans – gathering documents and money, finding friends and families across borders, and preparing to flee, fight or be arrested. Anti-transgender legislation is creating a new wave of refugees.

After the “transgender threat” was brought into the Texas House last year, LGBTQ hotline The Trevor Project received a 150% increase in calls from young people in Texas over the previous year , with many citing anti-trans legislation as the cause of their distress.

The law failed, but it could return as the same handful of hate organizations continue to push their agendas into state homes and tie their vicious discrimination to “conservative” identity during campaign seasons. In the meantime, Texas Governor Greg Abbot ordered the state to investigate families providing their children with gender-affirming care in late February — just before his primary, of course.

In 2018, the University of Texas at Austin conducted one of the most ambitious studies of transgender youth between the ages of 15 and 21 to assess the state of their mental health. Previous studies have already shown that 82% of transgender people have suicidal ideation and 40% attempt to do so in their lifetime – rates are higher among trans teenagers.

Those of us who live at the intersection of multiple oppressed identities, particularly black transgender youth, experience higher rates of suicidal ideation and attempts than our black cisgender peers and with far fewer culturally competent resources available than our white trans brothers and sisters.

The UT Austin study found a very clear way to knock down these alarming statistics. Trans youth who were able to simply use their name and chosen or assertive pronouns experienced: 71% fewer symptoms of severe depression, a 34% decrease in suicidal ideation, and a 65% decrease in suicide attempts.

Even these seemingly simple and benign solutions were enough to land a parent in Texas. The idea of ​​gender-affirming health care also seems out of the question, and Texas Children’s Hospital soon ceased providing this often life-saving care. From the hospital’s statement: “After evaluating the actions of the Attorney General and the Governor, Texas Children’s Hospital has suspended prescription hormone therapies for gender affirmation services. This action has been taken to protect our healthcare professionals and affected families from possible criminal ramifications.

With this, children who finally found a way to feel a little more comfortable in their own skin with drugs used for decades on cis and trans children were now forced to transition or move somewhere where they can receive treatment.

A study published earlier this year found that gender-affirming care for young people was linked to 60% lower odds of moderate or severe depression and 73% lower odds of suicidality.

We don’t have the data on what happens when this care is suddenly ripped from you, but we will soon.

A judge blocked Abbot’s order on Friday, March 11, but that’s not the end of it. The Texas AG filed a notice that it would appeal the case an hour later, saying it was ready to take the case to the Supreme Court. That these life-saving family choices are even the subject of some kind of public “debate” is so detrimental to transgender people of all ages.

Idaho went ahead and went further with HB 675. The bill makes it illegal to perform any medical treatment to help a child affirm their gender, but it states that doctors can take surgical and medical measures to forcibly adapt the bodies of intersex children. into the false notion of binary gender – an action that intersex activists have called unnecessary and traumatic for decades and that the United Nations has declared a violation of human rights.

The legislation would also threaten parents who cross state lines for gender-affirming care with felony charges. Fortunately, Idaho HB 675 hasn’t come out of the Idaho Legislature yet.

These laws impact LGBTQ+ youth not only in these states, but across the country.

I remember watching the slow march of marriage equality in high school. I had to ask the IT guy to unlock The Advocate, personally advancing the queer agenda at my own school. I have seen debates about marriage equality and the legal right to found a family quickly devolve into assertions that we are only a hair’s breadth from bestiality.

States that were early adopters of these laws saw a 7% decrease in teen suicides across the board, but the specific impact on LGBTQ+ teens was undeniable. States saw a 14% reduction in suicide attempts – states that did not legalize same-sex marriage saw no change.

The Trevor Project launched a poll last year to investigate the impact the deluge of anti-trans laws had on young people: 85% of transgender and non-binary young people said the debates around these laws had had a negative impact on their mental health. The supposed impulse of all these laws is to protect children.

What we can see very clearly is that these laws do not protect children. They protect ideologies.

The people behind this brutal and discriminatory rhetoric have clearly never had to try to convince a trans teenager to stay, promising them that somewhere, one day, they can just exist in peace.

I’ve often found that when I’m feeling hopeless, which I certainly am right now, finding a way to be helpful gives me a little sense of control. You don’t have to live in a state to call their lawmakers. You can donate any amount of money to local organizations that fight on the ground for the children in their backyard. You can go from ally to accomplice and help these families who are fighting for the lives of their children.

As the great American philosopher, Mr. Rogers reminds us, when life is a dumpster fire and heartless fanatics attack children (not a verbatim quote), “seek the helpers”. I can’t begin to describe how working with queer and trans youth has restored my faith in humanity and how very different their childhoods are from mine.

Although I sometimes get salty about their access to care and community that I couldn’t even imagine in the early 2000s, these laws make it more than clear that transgender visibility hasn’t and won’t save us. But these kids are tough, because being authentic isn’t for the weak. I encourage anyone who feels hopeless to turn to the young and the just hell they raise.

For example: HB 1557, or Florida’s “Don’t Say Gay” legislation, is a soup of unintelligible words that would give parents sweeping rights to protest or sue the school over suspected LGBTQ+ content or discussions. While the law applies to students in kindergarten through third grade, it also provides leeway for the Florida Department of Education to decide what appropriate “exposure” to LGBTQ+ content is for all students.

Last week on social media, I started seeing videos coming out of Florida high schools – crowds of bodies coming out of Florida high school hallways and into parking lots and football fields. Thousands of students across the state came out to protest the bill, leading chants of “say gay” and passing megaphones to LGBTQ+ students to share their voices.

While the thought of being outside at that age is amazing to me, the thought of having hundreds of my peers supporting and cheering me on brings me to tears.

More students descended on the capital. LGBTQ+ students led a sit-in on March 7 and in the halls of the capital they read the names of LGBTQ+ people who died by suicide. These kids know how high the stakes are.

One lawmaker said, “They shouldn’t have to abstain from being kids to come here and make sure we do our job well.”

Lazarus Nance Letcher (they) holds a Ph.D. candidate in American Studies at the University of New Mexico and a musician. They wrote this article for Source New Mexico, a sister site to the Pennsylvania Capital-Star, where it first appeared.