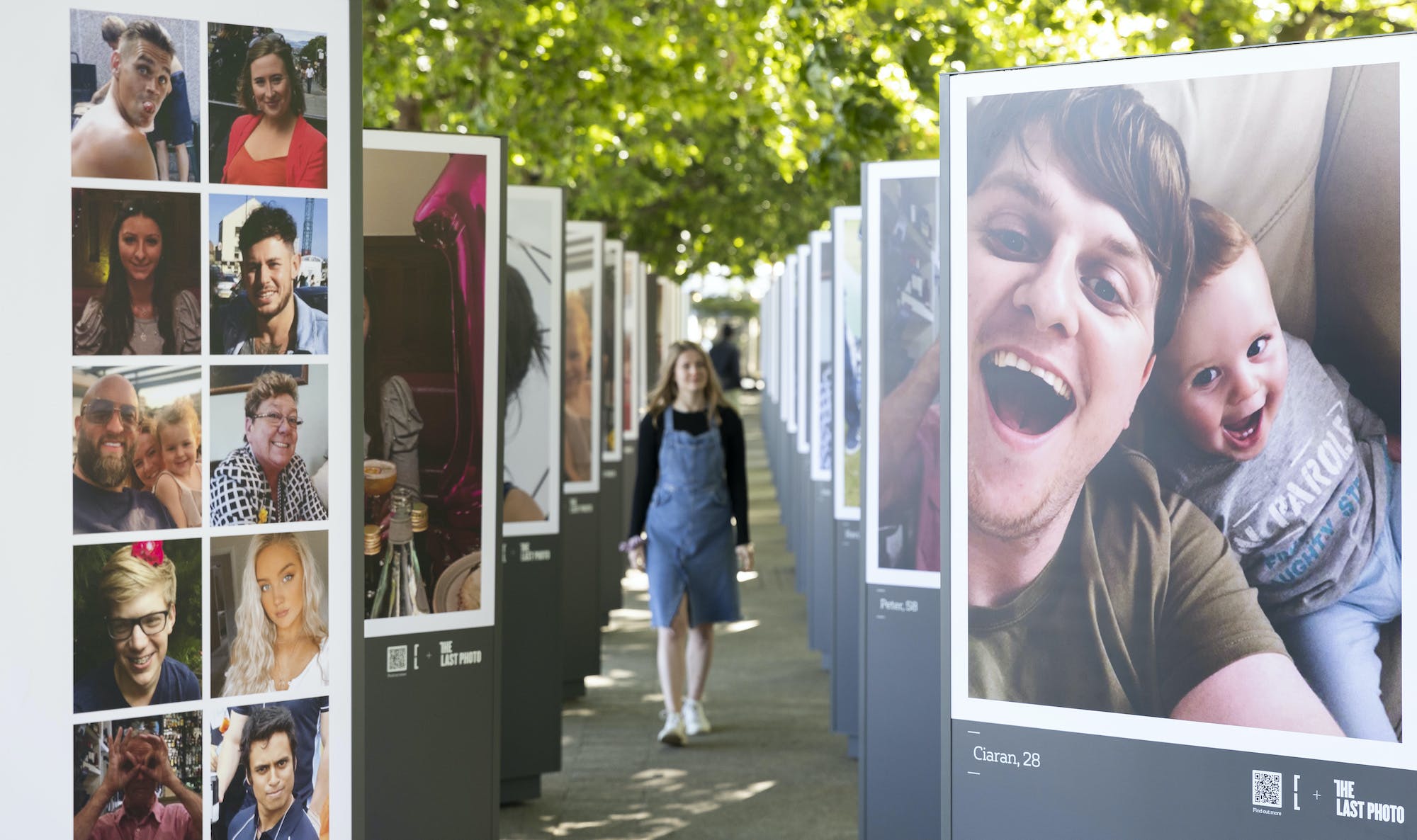 The Last Photo is a new UK-wide campaign from suicide prevention charity Campaign Against Living Miserably (CALM), created with adam & eveDDB in London, which aims to offer practical advice on what to what suicidal behavior might look like and how to help loved ones you might be worried about.

The campaign also aims to redress the ‘picture’ of suicide that we might have in our minds, of someone who is seemingly depressed, reclusive and sad. As the simple but extremely powerful campaign shows, this is often not the case, and instead those struggling with suicidal thoughts may actually appear happy and successful.

To do this, CALM and adam&eve created a photo installation of smiling people, presented in an outdoor exhibition on the South Bank in London. The photos have been on display since Monday, but today it is revealed that they are among the last images taken of people who have taken their own lives.

The exhibit is accompanied by a 90-second TV advert, launched today on ITV’s This Morning, the TV show supporting the initiative. The spot features home video footage that similarly shows seemingly happy people enjoying life, playing with children and cracking jokes, before it was revealed at the end only shortly after shooting. , they died by suicide. A broader integrated campaign will also appear in print and social media, with CALM ambassadors, brands and partners offering broader content.

The new campaign follows Project 84, a major initiative launched by CALM in 2018 which saw a sculptural installation of men who died by suicide installed atop the former ITV building on the South Bank. This campaign aimed to highlight the shocking number of men who commit suicide every week.

When the charity launched, CALM’s work was initially focused on men, who are more likely to die by suicide, although it has now expanded to all genders and this campaign aims to raise awareness of the rising suicide deaths over the past four years. . Statistics now show that an average of 125 people die per week by suicide, including 94 men.

The danger with statistics is that we can become immune to the reality of the lives behind them, and the goal of Project 94 was to find a way to bring the numbers to life for people and show the amount of loss that occurs. produce. With The Last Photo, the mission goes to a deeper level – by showing images of people in ordinary, everyday contexts, seemingly cheerful and happy, the campaign reminds us of the reality that this could happen to any family, and the awareness of this can be the key to prevention.

Accompanying the footage from The Last Photo, audio interviews with affected families are hosted online, where they speak of the shock of their loss. The charity stayed in very close contact with the families of those featured throughout the campaign and worked with them to ensure they were completely comfortable with how their loved ones were included. in the countryside. “Duty of care was extremely important to us,” says Matthew Jennings, CMO of CALM.

“Obviously asking people to share photos or images of a loved one could be quite triggering, we wanted to make sure we didn’t create any negative impact on those families…we made sure throughout the process that ‘It was very personalized to the individual, we didn’t go en masse, it was very based on each family, each case, each story we wanted to tell.

Key to the campaign is practical advice to help people recognize the signs of suicide and address the issue with loved ones to help prevent it.

“While not everyone has experienced suicide, I think you have an idea in your mind of what that person must be like – they’re probably reclusive, they probably don’t go out as much…the reality is that that’s not always the case,” says adam&eveDDB ECD Ant Nelson. “It’s the strongest thing with the voice recordings of families saying ‘I just didn’t see it’… It’s something that we just have to tell people, that sometimes there’s no sign… we just have to keep watching people.”