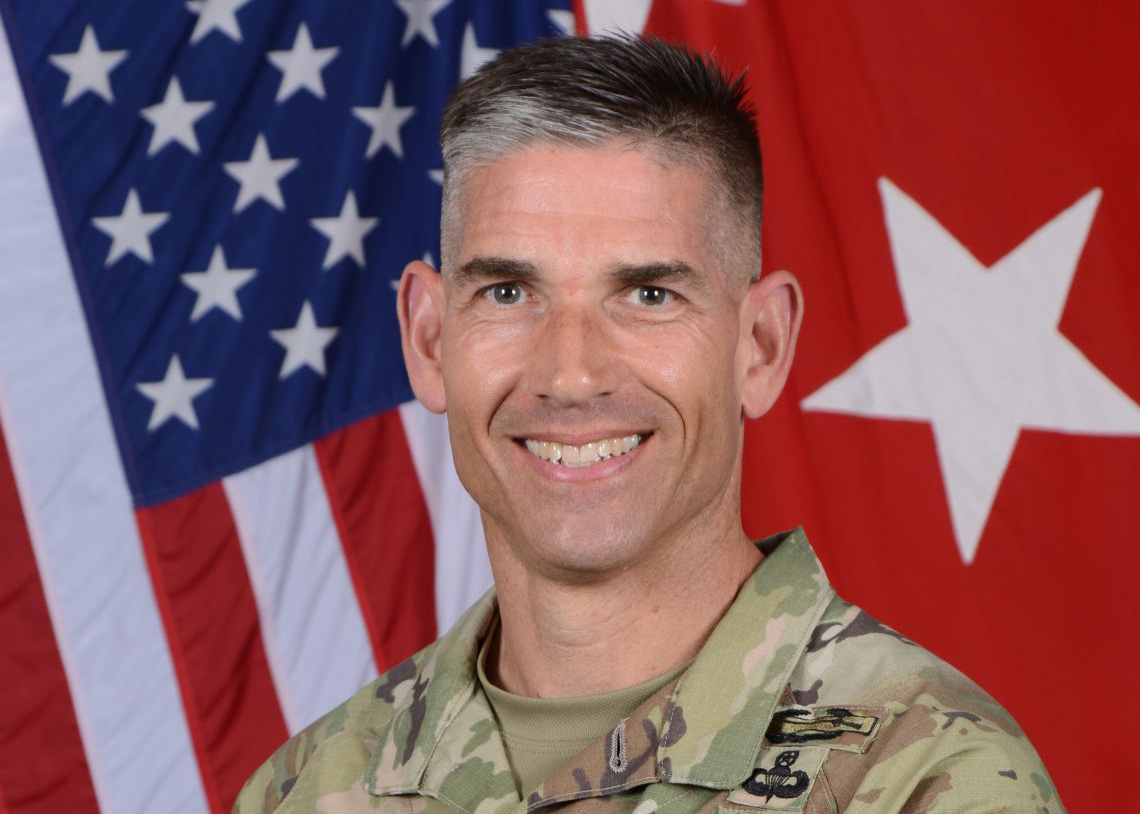 The commander of the US Army in Alaska said his top priority was to reduce the rising rate of suicide among soldiers stationed in the state.

This is after the number fell from eight suicides in 2019 and seven in 2020 to 17 in 2021 which are confirmed or suspected suicides.

Maj. Gen. Brian Eifler says it’s an issue he and other senior Army officials think about and work on every day. He says there are specific things about Alaska that come into play, but often it’s other issues in a soldier’s life that are exacerbated by being stationed in the north, in most cases far from home, which become contributing factors to depression and despair.

[Sign up for Alaska Public Media’s daily newsletter to get our top stories delivered to your inbox.]

The following transcript has been lightly edited for clarity.

Major General Brian Eifler: Being far from Bas 48, for example, and it’s very expensive to have a flight, especially in the bad season, isn’t it? To reunite with the family, you can’t just get in your car and drive, that kind of adds to the stress. You know, some people don’t handle temperature extremes well, and it can play on people, you know, whether it’s depression, lack of vitamin D, all those things that can contribute to stressors of maybe something else is going on. I haven’t seen where it’s, “Oh, it’s Alaska, and because of that” it’s usually something else, like a relationship or an inability to cope with the situation they’re in are found. And it’s amplified because of the environment.

Casey’s Grove: You hear people talk a lot about the dark in the cold. You can see how, layered on top of other issues, that would be…

BE: I think that’s right. I mean, it’s, I say, Alaska isn’t for everyone. And it’s a tough place for people to live. It’s full of tough people who live in Alaska. And the environment here is something that a lot of people, and a lot of our soldiers, love. They want this adventure. But there are a few that don’t do well. And in some cases, it doesn’t matter where they come from. There are people from Miami, Florida who love this place, who love riding and living in Fairbanks. And then there are those who don’t.

So one of the other things we’re trying to do with the military is to bring people here who are more willing and more interested in serving in an environment like the final frontier. I mean, it’s called the final frontier for a reason. Some people probably shouldn’t come to Alaska, because of certain things in their lives or certain challenges they face. And we are an army first for the people. So we’re really looking at, OK, how do we really put people first? How do we get away from bureaucracy, you know, “Here, everybody gets this number of people”, and into kind of slices of salami through the service, to treat Alaska differently and to make sure that the people who come here are the people who will thrive here.

CGQ: Are the higher rates, the suicides that you’ve seen in Alaska, related in any way to combat stress?

BE: Ironically, no. What we see is the inability to cope. And we’re not necessarily talking about PTSD related to combat, it could be PTSD from something that happened in their life before. But we can cure that, right? And then we just have to give people the help they need to “fight well”, as we say, through this and improve on the other side. And so, yes, years ago combat PTSD was a big issue, but not so much now, where the military is largely not in combat like it used to be, especially the brigades here in Alaska, where they toured back and forth to Afghanistan and Iraq for years. And that really stopped a few years ago. And so a lot of our challenges are with the younger force. We have people who are struggling to cope with life, in relationships, and we can help them with that.

CG: I had read something, too, that the army looked at people who had been stationed in Alaska, and in the first year of their arrival here, they had struggled a little more than others. Is it true?

BE: Yeah, I think like with any kind of, you know, like a new job, or a new place you’re moving in life, you’re always looking, especially in the military, we’re always looking really hard at how we welcome and integrate new soldiers and their families. I think we can always do better with that. And I think if you come to Alaska in the summer it’s a much better transition than if you come in the middle of winter. It may shock the system. A pleasant, beautiful, and awe-inspiring spring or summer in Alaska is a great transition. So how we bring people in, the season we bring them in – sometimes we can’t help – but we really have to look at how we bring people in and sponsor them properly, help show them the resources. We have a welcome center for our new soldiers here and in Fairbanks, so we kind of allow them to, “Here’s everything you need to know about Alaska. Here are all the things you need to do for your vehicle. Here’s all the things,” and a lot of the things we’re trying to do before they get here. But we want to make sure they fit well. The first six months are really critical. And, yes, you want to get them through the first winter, right? And make sure they’re okay. So I think the first year is always something that we watch closely.

CG: I wonder what other things the army is doing in this regard? I had seen everything from vitamin D supplement packs to top recreational facilities.

BE: Yeah, well, you know, educating soldiers: “Hey, how do you do a vitamin D check?” Well, usually you have to draw blood, and we really don’t need to, you can just get your supplements and take vitamin D. It’s very simple, isn’t it?

But more importantly, what we’re really trying to do is connect soldiers. Sometimes soldiers want to sit in the barracks or sit at home and not go out and do nothing. And we want to get people and their buddies to come grab them, and, “Hey, come on, let’s go. Let’s do this. Let’s have fun. Let’s go see a glacier. Let’s do that climb. Let’s go for this hike. Let’s learn to ski, to snowboard”, which you can do in all our facilities. I think we need to help our soldiers get out more and do some of these things. Again, most do. There is a percentage that does not. And we have to help them with that.

So we launched a Mission 100, which is basically our mission. You know, in military terms, you give the soldiers a mission, and they’re going to accomplish it. And Mission 100 is about a connection. One hundred percent is the term. Everyone connected. We may not be able to prevent suicide, Casey, but we can reduce it. We can save some people. We may not save everyone. But we can save many people. And being connected, like I said, giving some people hope and being really aware of our surroundings and seeing signs of people. It could be, “Why did Casey just go out there, hang out? I can see what is happening. It’s just being engaged, and especially coming out of COVID, where everyone is isolated, it didn’t help.

The other thing we do to overcome the stigma of asking for help is we have counsellors, and military family life counselors, who are basically in all of our facilities, in every unit, who are technically off books, in other words, there. If you go see an “M-flack”, as we call them (for MFLC or Military and Family Life Counselor) there, they don’t have any military records. So that’s for sure. So if you wanted to talk to someone, you don’t want it on your file or something, or you care about your career or your advancement, they don’t even take notes. But he’s someone to talk to and someone who can help. And so what we did was basically say, “OK, everyone, including me, will seek advice from one of these MFLCs.” And the comments – again, not everything is disclosed and there are no names or anything – but the comments we get from advisers are like, ‘I see so many people this week, and half of them really needed to see me, and they never would have come if we hadn’t started this program and asked everyone to come in. Or some of them come back for a second session, or some of them bring in their spouse, because they want relationship advice, so we see that creating understanding, overcoming stigma, and most importantly getting people to help and providing them with a resource available. So it’s part of Mission 100 and reaching out. And we think that by continuing to do that, I think we’re making progress.

CG: Do you run into any obstacles trying to bring Army therapists to Alaska?

BE: Yeah, it was a challenge. I mean, it’s a challenge in Alaska in general. We don’t have a lot of our clinician positions filled traditionally, we never had any in the army in Alaska. And so we are looking, the military is looking, and the Department of Defense is looking at how we can better incentivize them to bring people from the Lower 48 to Alaska who want to stay here and work. Then in some cases we have DOD civilians and stuff like that, converting them to military positions to bring more of the military flavor here, because it’s hard to get all of our behavioral health people in Alaska, especially more even north to Fairbanks.

2022-05-05
Previous Post: National Suicide Prevention Conference “Together for Life” will break new ground in the name of suicide prevention
Next Post: Suicide prevention should be a priority in Iowa