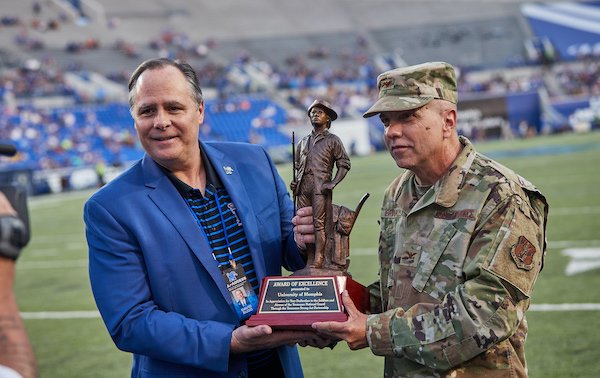 Memphis— At its quarterly meeting on Tuesday, the University of Memphis Board of Trustees announced the creation of the Rudd Institute for Veteran and Military Suicide Prevention as a thank you to UofM President David Rudd.

Helping and supporting veterans has been a top priority for Rudd, a veteran himself, throughout his career. Under his leadership, UdeM was named to the list of military-friendly schools for seven consecutive years. The list honors the colleges, universities, and trade schools that do the most to welcome and ensure the success of military service members and veterans as students. The University ranked No. 9 nationally on the list in 2020.

Other initiatives for UdM veterans and military include the Veterans and Military Student Services Center to aid in campus success and participation in the Yellow Ribbon Program to help students attend the school at little or no cost.

Rudd was co-founder and founding scientific director of the National Center for Veterans Studies at the University of Utah. He has published over 200 scientific articles and numerous books on the clinical care of suicidal people and is considered an international leader in suicide prevention. Over the years, he has focused his research on veteran suicide prevention and has established thoughtful, evidence-based programs to create resources for veterans in higher education.

Other news from the Board of Directors:

This article was first published by University of Memphis Press.