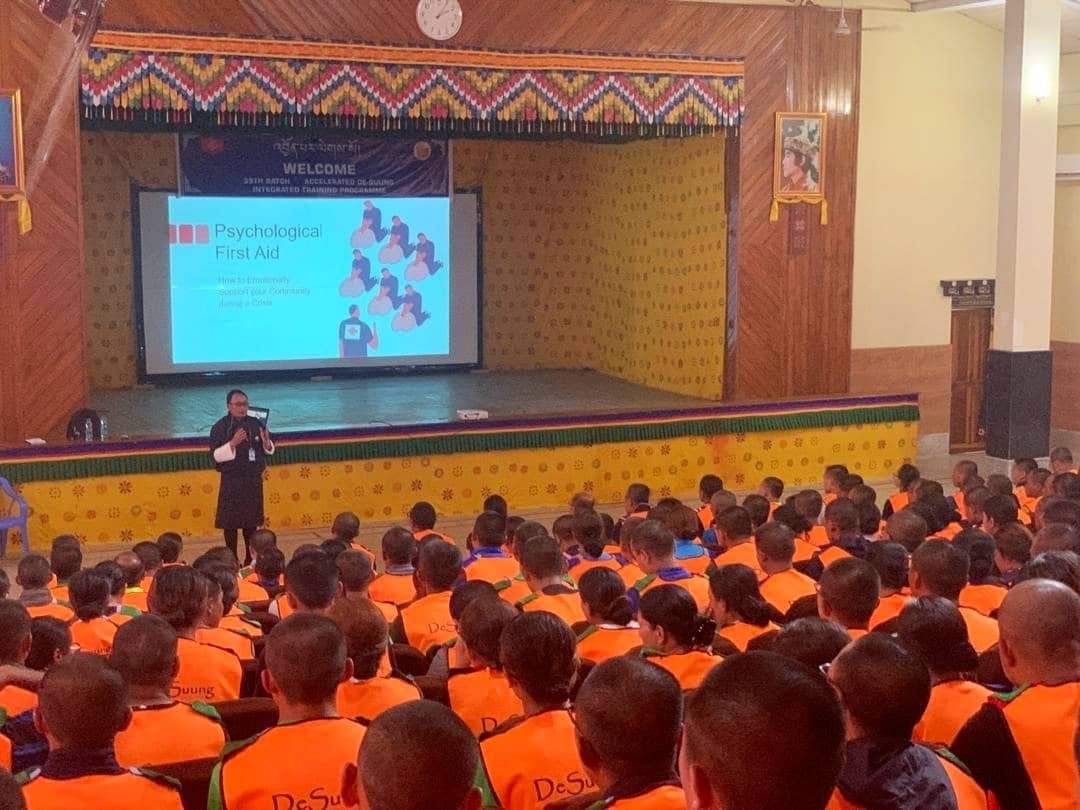 Suicide prevention in Bhutan: scaling up during the pandemic

COVID-19 has brought significant change and uncertainty to people’s lives. Family illnesses and bereavement, unemployment, school closures, and lack of physical contact with family and friends can all lead to increased stress and mental health issues like depression. At worst, depression can lead to suicide, which tragically kills more than 700,000 people every year.

Even before the COVID-19 pandemic, Bhutan, a country in Southeast Asia, realized that suicide was becoming a serious public health problem. Although he is credited with introducing the term “Gross National Happiness” in 1972, suicide is the sixth leading cause of death in Bhutan. Moreover, for every four deaths by suicide in the country, only one suicide attempt is recorded. This is an indication of significant under-reporting, given estimates that globally there are more than 20 suicide attempts for every suicide. In 2015, Bhutan’s Ministry of Health established a multi-year National Suicide Prevention Program to address this important public health issue. The National Action Plan for Suicide Prevention (2018-2023) includes strategies to increase detection of suicidal ideation and to respond to suicidal ideation and attempts.

At the start of the pandemic, Bhutan had few mental health human resources, with only two practicing psychiatrists and a handful of trained psychiatric nurses and clinical counsellors. Anticipating the mental health consequences of the pandemic and the disruption of mental health services, in March 2020 the Ministry of Health set up, with guidance from the WHO country-based team, a National COVID-19 Psychosocial and Mental Health Response Team to address mental health and psychosocial needs across the country.

Training at scale: essential for scaling up mental health and suicide prevention services

Training is an essential part of scaling up mental health and suicide prevention services. In 2020-2021, the Bhutan Mental Health Response Team trained over 20,000 frontline workers and community volunteers across Bhutan on identifying risk factors for suicide, how to provide a basic psychosocial support to community members in distress and how to make referrals. The WHO Psychological First Aid+ (PFA+) guide was adapted and used during these training programmes. The response team has also hosted over 200 webinars on suicide prevention, mental health, and addictions management. Participants shared that after the training, not only were they able to identify risk factors among community members, but they also learned to recognize signs of stress in themselves and knew when to ask for help. ‘aid.

In addition to frontline workers and community volunteers, 140 first responders ̶ district doctors, mental health workers and clinical counselors ̶ have been trained to effectively deal with self-harm and suicide. Funded by WHO, the initiatives included a train-the-trainer program on suicide prevention and management, which focused on strengthening Bhutan’s national suicide registry.

The response team also held a training workshop for media representatives in November 2021 to encourage responsible reporting of suicides. The team developed and disseminated “Media Guidelines for Responsible Reporting on Mental Health and Suicide” during the workshop.

These initiatives implemented in Bhutan are in line with the WHO strategy Guide to implementing LIVE LIFE for suicide prevention in countries. The guide, published in June 2021, recommends four key strategies to reduce suicide deaths: limiting access to resources; interact with the media for responsible reporting on suicides; fostering socio-emotional life skills in adolescents; and the early identification, assessment, management and follow-up of anyone affected by suicidal behaviors.

In addition to capacity building initiatives, the Bhutan Mental Health Response Team has re-launched a crisis hotline, staffed by trained mental health professionals. More than 1,500 people dealing with mental health issues, alcohol and drug use problems, domestic violence and self-harm have already received help through the helpline. The response team also re-established links between services and referral pathways, allowing helpline callers to access treatment and clinical care when needed. In addition to five dedicated counseling hotlines at the national level, another 22 hotlines are now available in the districts and Thromdes (municipalities) of Bhutan.

Reflecting on the activities of the response team, Dr Chencho Dorji, a practicing Bhutanese psychiatrist supported by WHO, noted that “the pandemic has provided a unique opportunity to adopt new policies and implement mental health programs that had not been attempted before, enabling the mobilization of human resources for mental health.In addition, the increased accessibility, convenience and anonymity provided by telephone counseling has encouraged many people to seek help and access treatment, opening the door to scaling up online and telepsychiatric services and suicide prevention in the country.