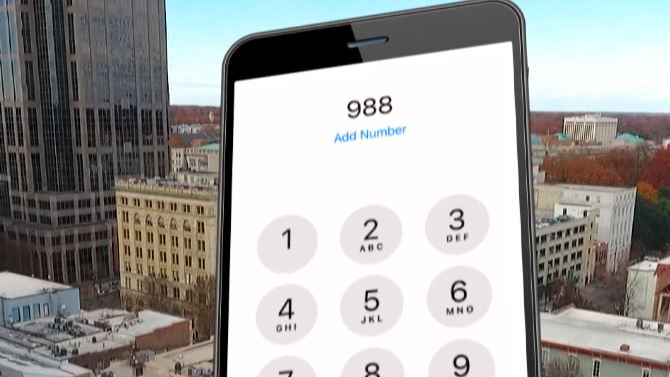 RALEIGH, NC (WNCN) — People in crisis thinking about suicide will soon have a new, easy-to-use national number to connect them to the help they need.

Across the country, 911 will provide you with a first responder to send you help in an emergency. But until now, there was no easy number to call if you were suicidal.

There is a national 10-digit suicide hotline and there are many local numbers, but they often have to be searched or the numbers are difficult to remember.

Now, the FCC has said you’ll soon be able to dial 988 anywhere in the United States to be connected to the National Suicide Prevention Hotline.

Registered clinical social worker Mike Rovaris said having three quick numbers to type into a phone would be very beneficial.

“A lot of times when people contemplate self-harm, they go through a lot of emotions,” he said. “If we have a number like 911 that is written down by heart, that will be a big help.”

It will take some time for the telephone companies and mobile operators to fine-tune their systems to connect the 988 number to the suicide hotline, which is why it will not be operational until July 16.

Many people who die by suicide may have had an undiagnosed case of autism, study finds

“This represents a real opportunity for the country and will save lives,” Rovaris said.

The federal government is providing $177 million to improve telephone system infrastructure and an additional $105 million to bolster suicide crisis call center staff, as calls are expected to dramatically increase a once the new number is active.

“It’s not just for people in the process of taking action to hurt themselves,” Rovaris said. “It’s also for people who just have ideas about it – it’s a key essential.”

Statistics from the National Institute of Mental Health indicate that suicide is the 10th leading cause of death in the United States.

Once implemented, the new 988 number will also support SMS and chat.