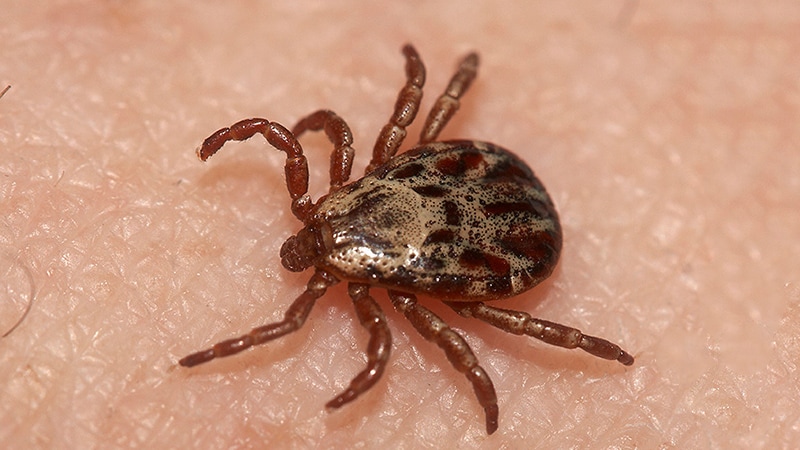 Patients with Lyme disease are at an increased risk for any mental disorder, emotional disorders and suicidal behavior, according to new research.

Results of a large population-based study show that the rate of depression was 42% higher in patients with Lyme disease than in people who had no history of Lyme disease; the suicide rate was 75% higher, said lead author Brian A. Fallon, MD, professor of clinical psychiatry and director of the Lyme and Tick-Borne Diseases Research Center, Columbia University, New York City.

The results were published online July 28 in the American Journal of Psychiatry.

Lyme disease, which is caused by bacteria carried by infected ticks, can lead to severe pain syndromes, debilitating fatigue and neurological problems. The prevalence of Lyme disease appears to be increasing in the United States as ticks spread beyond epicentres in the Northeast and Midwest, Fallon said.

Previous research has linked Lyme disease to depression, but those studies were either small or “otherwise flawed,” he noted. For example, patients may have been reluctant to participate in research conducted by psychiatric institutions, which could have skewed the results, he said.

For the current population-based cohort study, the researchers used linked Danish registers to collect information on patients who had been diagnosed with Lyme borreliosis and later received a psychiatric diagnosis.

The comparison group included 6,933,221 people who had not been diagnosed with Lyme disease.

The results of the fully adjusted model show that the rate of any mental disorder was 28% higher in participants with Lyme borreliosis than in those without (incidence rate ratio [IRR],1,28; 95% CI, 1.20 – 1.37).

For the secondary outcome of affective disorder, the investigator found a 42% higher rate in people with Lyme borreliosis compared to people without the disease (IRR, 1.42; 95% CI, 1.27 – 1.59).

Although the absolute suicide rate is low, with just 25 deaths over a 22-year period, “even one suicide in my mind is too much,” Fallon said.

“If we can educate doctors about the mental health consequences of Lyme disease, and if it makes them more alert and asks more questions about depression and suicidal thoughts, that would be a really good outcome of this study,” he added.

Research has also revealed a “dose-response.” The higher the number of hospital contacts for Lyme disease, the higher the rates of diagnoses of mental disorders.

Additionally, the analysis generally showed that rates of mental disorders were much higher in the first year after Lyme disease diagnosis, after which rates declined somewhat.

To determine whether disorders other than mental health disorders were affected after Lyme disease, investigators assessed the rate of fractures not involving the skull or spine. Compared to the rates of such fractures, the rates were two, three and seven times higher for mental disorders, emotional disorders and suicide attempts, respectively.

However, there was an increased rate of fractures after a hospital diagnosis of Lyme borreliosis. Fallon said this could be due to the use of prescription psychiatric drugs that are associated with an increased risk of fractures.

Physical factors and other factors related to Lyme disease could also play a role, Fallon said. “The pain associated with Lyme disease may lead to an increased rate of depression; deep fatigue may make it difficult for people to work or think and therefore lose their economic stability,” he added.

Fallon noted that because the study focused on outpatient, inpatient, or emergency department hospital contacts, it did not include patients who had been treated by community physicians.

Commenting on the findings of Medscape Medical NewsPaul G. Auwaerter, MD, Sherrilyn and Ken Fisher Professor of Medicine and Clinical Director, Division of Infectious Diseases, Johns Hopkins University School of Medicine, Baltimore, Maryland, said some “weight” should be given to studies like this that use the Danish National Patient Registry.

However, the small absolute numbers of some mental health disorders in the study “make the significance uncertain, as minor changes could cause the results to vary,” he noted.

Auwaerter, who was not involved in the research, added that the study used a different registry for mental health disorders, which could create “a methodological problem” that weakens the results.

He pointed out that studies of a link between infections and mental disorders are not unique to Lyme disease. Other studies have looked at the possible link between certain viruses and schizophrenia; in some of these studies, the link has not been confirmed, he said.

Additionally, Auwaerter noted that the study only reported association, not causation.

The study was funded by the Global Lyme Alliance Inc.. Investigators report no relevant financial relationships. Auwaerter has received support from Pfizer, Ixodes and Medical-legal.

2021-08-20
Previous Post: Self-esteem is one of the four main predictors of suicidal behavior in students | Discoveries of AI algorithms
Next Post: Researchers investigate suicidal behaviors and self-harm among healthcare workers