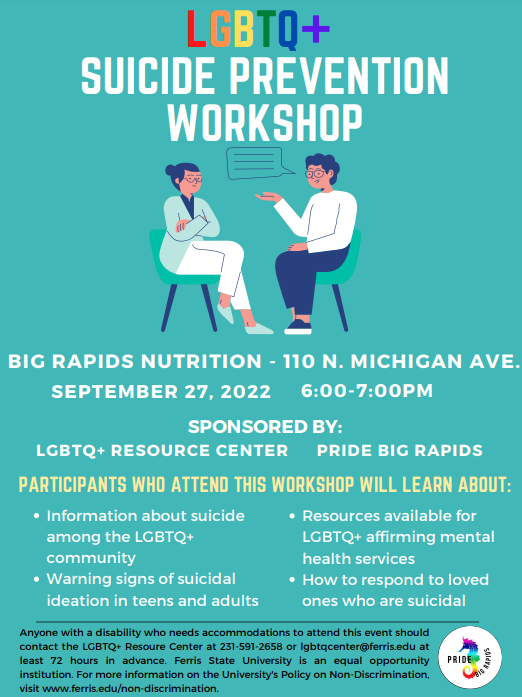 Following the success of its inaugural festival in June, Pride Big Rapids is expanding its offering to include information and resources on suicide awareness and techniques to prevent it.

Big Rapids Pride Vice President Remington Hernandez said the event was an opportunity to shed light on this often stigmatized and important topic.

“Big Rapids didn’t have a lot of those kinds of resources,” Hernandez said. “It’s a subject that is close to the hearts of many people. Suicide prevention literally saves lives, and what we’re going to do is tell people how they can talk to their family members now so they know they’re not alone.

“We will also talk to family members or loved ones in general about how they can help talk to their potentially suicidal loved one,” he added. “What they can say and what they can do and what resources are available to them.”

According to a 2018 study from the Centers for Disease Control and Prevention, suicide is the second leading cause of death among young people aged 10 to 24. A 2020 CDC study also found that LGBTQ+ youth are more than four times more likely to attempt suicide than their peers.

Hernandez said the hope is that people know what resources are available to get help.

“We hope people will have a sense of community, will feel like someone is there for them,” Hernandez said. “We care about their lives and that they can carry on, and there are people out there to work with their issues, to resolve them. At the end of the day, they are loved.

The Trevor Project estimates that more than 1.8 million LGBTQ+ youth (13-24 years old) seriously consider suicide every year in the United States – and at least one suicide attempt every 45 seconds.

The organization also conducted a survey this year on the mental health of young LGBTQ+ people. It revealed that 45% of LGBTQ+ youth had seriously considered attempting suicide in the past year, including more than half of transgender and non-binary youth.

“Big Rapids is a diverse community and our festival showed that – drawing around 2,500 people from all walks of life,” Coleman said. “With this in mind, we must recognize the challenges facing our neighbors and offer them support.”